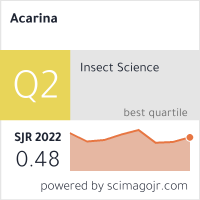 NEW IXODES RICINUS TICK POPULATIONS APPEARING AS A RESULT OF, AND TOLERANT TO, CADMIUM CONTAMINATION

NEW IXODES RICINUS TICK POPULATIONS APPEARING AS A RESULT OF, AND TOLERANT TO, CADMIUM CONTAMINATION

This study was financially supported in part by a grant of the Russian Foundation for Basic Re-search, No. 04 - 04 - 49119 . W e would like to thank Sergei Golovatch, who corrected the English of an advanced draft.

Peculiarities of the exoskeleton structure of the progeny (F ) of Ixodes ricinus females were stud-ied. Females were collected on the Curonian Spit (Kaliningrad Region, Russia) where the proportion of ticks with and without exoskeleton anomalies increased from 12.7 to 42.5% during the past 6 years. It was proved that under the influence of heavy metal ions accumulation in the environment (first of all because of Cd accumulation) the tick population acquired some new qualities. It was stated that the weight of engorged females, laid by them egg batches and F nymphs was smaller among the specimens belonging to the group of ticks with exoskeleton anomalies. Time of larvae hatching among same group of ticks was also longer. All differences were statistically significant. Anoma-lous F adults were detected among normal as well as among progeny of anomalous parents, but among the first it was equal 11.6-21.6 (mean 17.1±1.82%) whereas among the second one it was equal 50.0-92.5 (mean 78.6±6.1%, pcO.OOOl). The positive correlation between number of anomalous tocks of F      generation and amount of Cd in the parent's organism and the hatched larvae was revealed (r = +0.985 and +0.987). Correlation with Pb concen-tration was negative (r = - 0 . 716 and -0.903).

Thus accumulation of Cd in the environment leads to the divergence inside the tick population and to the appearance of anomalous specimens. The latter, as it was demonstrated earlier on, are more susceptible to the tick-borne pathogens and are able to be multiinfected than normal ones, and,


being infected, are more active as vectors and accordingly more dangerous for the people.