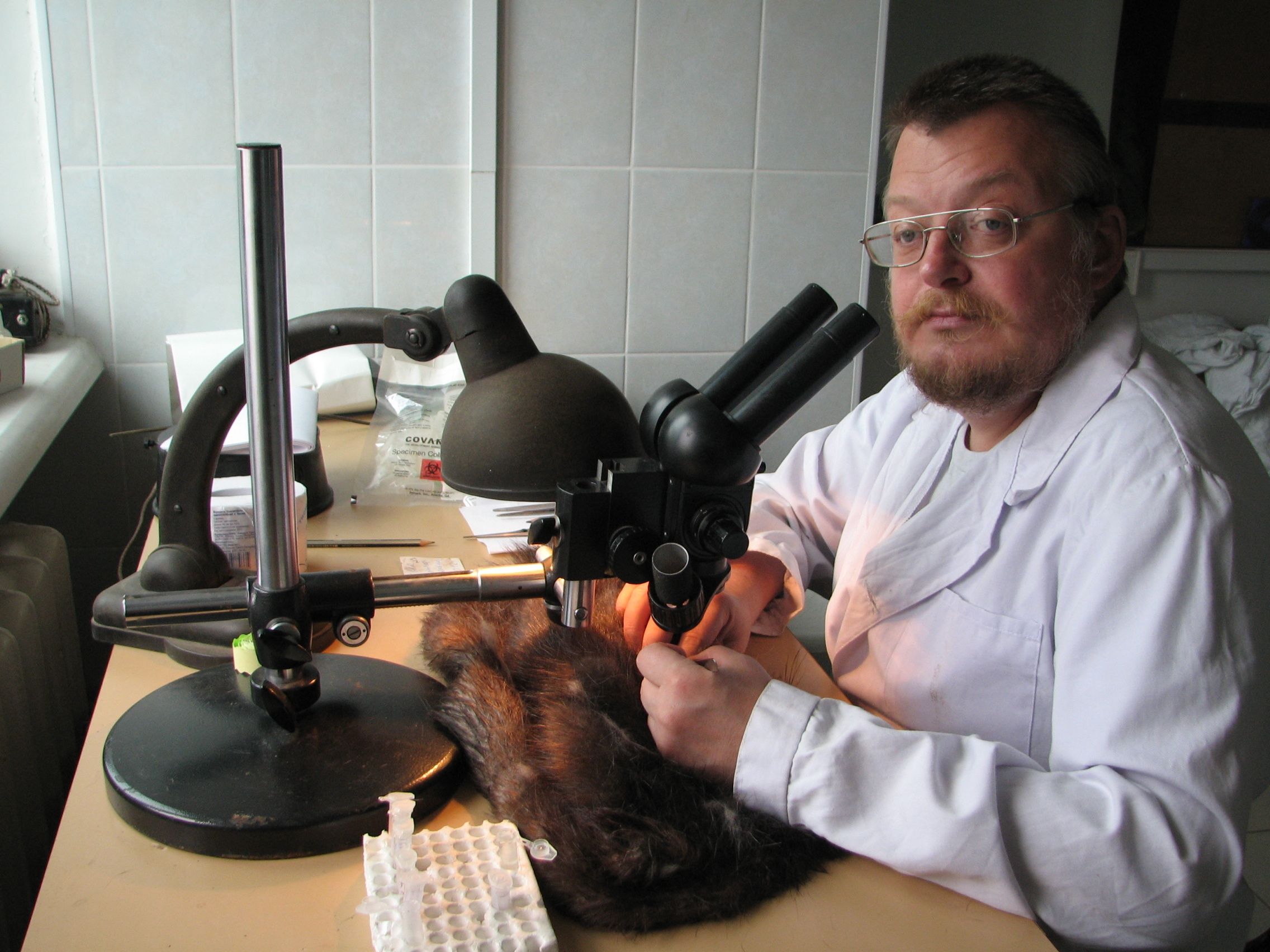 On 9 May 2018, at the age of 50, after a severe illness, Dr. Andre Vladimirovich Bochkov passed away. Andre Bochkov, Doctor of Biological Sciences, was an eminent acarologist and a chief researcher at the Zoological Institute of the Russian Academy of Sciences, who left in the prime of his scientific career. His death is an irretrievable loss for the international scientific community.

Dr. Bochkov was born on 28 August 1968 in Novosibirsk (Russia). In the mid-1970s, his family moved to the suburb of Leningrad (now St. Petersburg). Since his early years, Andre expressed great interest in biology, which was inspired by his school teacher E.V. Kudryashov—a graduate of Leningrad (currently St. Petersburg) State University. In 1986, after graduating from high school in the city of Taitsy (Gatchina District, Leningrad Region, Russia), he came to the Zoological Institute with a desire “to study tigers”. At that time, only laboratory assistant positions at the Parasitology Laboratory were available. Nevertheless, he was delighted by the opportunity to work at the Institute with parasites of vertebrates. Although the laboratory assistant duties in the animal facility were not particularly exciting, later, at an older age, Andre spoke with considerable pride of the fact that he had passed all of the steps of the scientific hierarchy. From the first days of his work in the laboratory, he showed great interest in Acarology. His first works dealt with the systematics of myobiid mites (Myobiidae), and they were based on the materials of his supervisor—acarologist Dr. H.V. Dubinina, who, at that time, was a scientific secretary of the Institute.

Alongside his work at the Institute, Andre was a part-time graduate student at the Department of Entomology of the Biological Faculty in the St. Petersburg State University, from which he graduated in 1996. Later, Andre argued that the Department was the place that shaped “real systematists”. By the time he graduated, his scientific interest was clearly focused on the systematics of a particular category of acariform mites—permanent parasites of mammals. He remained faithful to this group of arthropods until the end of his life. Upon graduation, he began to independently and enthusiastically conduct research on his favorite group of mites—myobiids. Gradually, his research covered other groups of parasitic mites associated with small mammals, such as Astigmata and Prostigmata. Since the early 1990s, Andre had participated in many expeditions to Central Asia and Kamchatka, becoming an extremely active collector of valuable research material. His last expeditions led Dr. Bochkov to Ethiopia, where, during 2016, he collected unique material for his morphological and molecular studies. By virtue of his sociability and excellent communication skills, Andre was able to establish and maintain contacts with many Russian and international zoologists who worked with the host animals of mites. Andre retained his youthful enthusiasm, dedication and inexhaustible interest for science his entire life.

In 1999, Andre Bochkov, an accomplished mite systematics specialist by then, defended his Candidate’s degree (Ph.D.) thesis titled “Mites of the family Myobiidae (Acari: Prostigmata) and their position in the system”. Scientific internships at foreign museums and universities played a huge role in Andre’s subsequent development as a scientist. One of them was his first internship at the Royal Institute of Natural Sciences of Belgium (Brussels) in 2000 with Professor Alex Fain—one of the greatest acarologists and mite systematists of the 20th century. A postdoctoral fellowship at the University of Michigan’s Museum of Zoology with Prof. Barry OConnor—a leading specialist in the systematics of astigmatid mites—has also helped Andre’s professional development. In Brussels, for the first time in his life, Andre had the opportunity to explore the richest world collection of mites that belonged to the group of his interest. The results of their collaborative work with Prof. Fain were published in several dozen of co-authored works. Because of his exposure to various acarological collections, as well as his productive cooperation with major international experts, in less than a decade, Andre became a world-leading specialist in the field of systematics and phylogenetics of acariform mites. Namely, fur and scabies mites, myobiids and cheyletids. The most important stage in his scientific career was the defense of his Doctoral dissertation (D.Sc.) in 2012, titled “Acariform mites (Acari: Acariformes), permanent parasites of mammals: phylogeny, systematics and host-parasite relationships”.

The scientific heritage of Dr. Bochkov is rich and diverse. He has authored over than 210 scientific publications, including 5 monographs. In the process of his taxonomic studies of mites, he described 443 new species and established 43 new genera and 7 subfamily-level taxa. In the last decade of his life, he devoted more than a dozen articles to the phylogeny of various family groups of parasitic acariform mites, including Cheyletoidea and Psoroptidia. To our deep regret, a number of Dr. Bochkov’s monographic works remain unfinished. They include revisions of the scabies mites of the Psoroptidae family, as well as revisions of the hair mites of the Atopomelidae family.

Simultaneously with his intensive research, Andre took the time to conduct other work for the benefit of science. He actively served on editorial boards of several Russian and international scientific journals, such as Acarina, Proceedings of the Zoological Institute of the Russian Academy of Sciences, International Journal of Acarology, Zootaxa and Zookeys. Largely due to his efforts as the deputy editor, the Russian journal Acarina has become one of the leading periodicals in the field of acarology in the world.

Despite his challenging character, straightforwardness and at times quickness of judgment, Andre was an extremely benevolent and responsive person in both professional and personal life. He was extremely communicable, and he easily made contacts with people of all ages, positions, and social circles. Known for his cheerfulness, optimism and (at times rough) sense of humor, Andre could liven up any company, be it in or outside of the workplace.

It is safe to say that Andre was one of the most “famous” employees of the Zoological Institute. In addition to his exceptional sociability and unique personal charm, Andre possessed solid authority on many scientific topics that went beyond mite systematics. In the early 2000s, he became one of the most active specialists who contributed to the development of cladistic methods in systematics. Andre even organized a short course of lectures on his approach at the Zoological Institute.

We will keep the memory of Andre in our hearts—an extraordinary bright person, a special friend and an outstanding scientist.